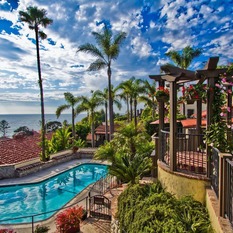 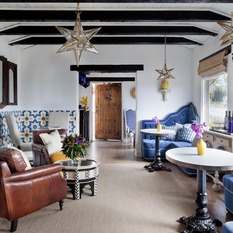 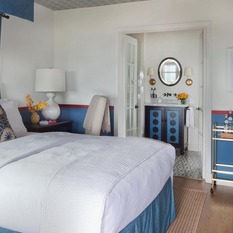 Casa Laguna is a castle-like seaside enclave of historical buildings that dates back to the early 1900s, nestled in the heart of Laguna Beach, California. The property, originally designed by one of California’s premier builder/architect teams, Frank Miller and Arthur Benton, for Miller’s wife, Marion, has been perched high above the Pacific Ocean for decades and remains one of the city’s most beautiful historical gems, known for its distinct structure made of massive concrete, stone and pressed-block edifices.

The property features the Mission House building, that now serves as Casa Laguna’s lobby and the nearby Mission Suite, which was thought to have been Miller’s interpretation of a family cottage or guest house. A second building was added to the property circa 1931, likely to house the property’s caretaker, and it is now home to the hotel’s premier Bungalow Suite. In 1945, the inn traded hands to Dewey Howard, a wealthy property developer from Los Angeles, who built several small buildings amongst the lush and sprawling landscape throughout the property.

Casa Laguna existed as a hotel and later as an artists’ colony until 1977 when it was converted into a bed & breakfast inn. In 2000 the property was purchased by Francois Leclair and it was completely renovated with incredible passion and attention to detail. Layers of paint were removed from the unique decorative pressed blocks and rare Catalina tiles. Modern materials were replaced with original-style wood and masonry. The buildings were soon returned to their original Mission-style appearance.  In 2000,Casa Laguna was recognized as a “Registered Historic Structure” by the City of Laguna Beach.

In 2014, Casa Laguna was sold to a PRG partnership that envisioned restoring the Spanish Colonial architecture and reimagining the inn as a luxury boutique hotel while honoring the rich and textured history. With designer Martyn Lawrence Bullard at the helm, an extensive redesign of the guest rooms and lobby was completed and the hotel reopened in April 2016.